Google Glasses: Streaming of Information Around the Eyeballs 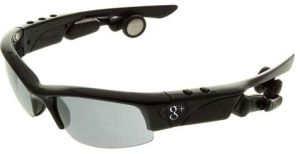 The big G is peeping at the technological horizon again and this time, it’ll come with a big bang, I am referring to its new & innovative product called the Google Glasses.

As per Google employees who are working on the project assert that the glasses would hit the shelves by the end of this year; pricing somewhere around $250 to $600, costing around the price of current smartphones, eh!

The gizmo would be based on Android, having 3G or 4G data connection along with a number of sensors including motion and GPS. Unique navigation system would be an addon.

In order to monitor the world in real time, the glasses have been fixed with a low-resolution built-in camera. As per sources, it would also overlay info regarding location, surroundings including landscapes & buildings and friends who happen to be somewhere around. Of course, the glasses are not designed to constant use; quite similar to smartphones, only to be used when required.

Sources claim that the G glasses would use other available Google software products, which are in operation today and the result would be displayed in an augmented reality view than as a Web browser page like the one seen on smartphones.

The glasses would be in sync with cloud and it is because of this, it’ll show result, for instance, Google Latitude to share location, Google Maps to show other things nearby and so on.

Whatever said and done, I am totally excited about this device inducing the wearable computing. Streaming of information around the eyeballs, glimpse of which we saw in MI4 is actually concretizing, ain’t this awesome!

Posted by InVault on February, 2012 in Android, Google, Tech